On Friday 13th October, 1972, a chartered flight carrying 45 national rugby team members with their families and friends, crashed in the Andes Range. Twelve people died in the crash. The survivors were faced with extremely harsh conditions in the middle of the Andes, facing 30 degree-below-zero temperatures, avalanches and starvation. They desperatley tried to survive with little food and no source of warmth at over 3,600 metres above sea level. However, they lost their hope after hearing on the radio that the search had been stopped. Finally, tired of the extreme temperatures, avalanches threats, the rising deaths of their fellow team mates and the bad rescue news, two of them decided to attempt to cross the mountains to reach Chile.
On 22nd of December of 1972, after being isolated for 72 days, the world came to know that 16 people had defeated death in the Andes Range. These events led to the book and movie “Alive”. Nowadays, it’s still known as the biggest survival experience, called “The Miracle in the Andes”

On the 18th January of 1973, 27 days after the survivor´s rescue, a patrol made up by many members of the Andinian Help Corps, were taken by helicopter to the place where the Fairchild plane remains. There, a few metres away from the plane, they set up camp. Together they started gathering all the remaining bodies around the Fairchild and the mountain. Almost 1 km away from the crashed plane, they found an area, which seemed to be out of avalanche risk and also had enough land to make a grave site. Here they then buried the accident victims. Near the grave they built a rustic stone altar with an orange iron cross above. Later, they went back to the place where the aircraft lay. They doused it with gasoline and set it on fire. When their work was complete and encouraged by the threatening noise of the avalanches, they agreed to leave. This is how the site remains today. 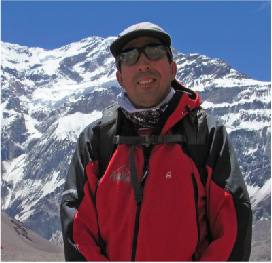 Join this expeditions led by one of the most qualified guides in Argentina.
Heber Orona is the first and only Argentine to do the 7 Summits. It was also the first Argentine to reach the summit of Mount Everest without oxygen or porters assistance.